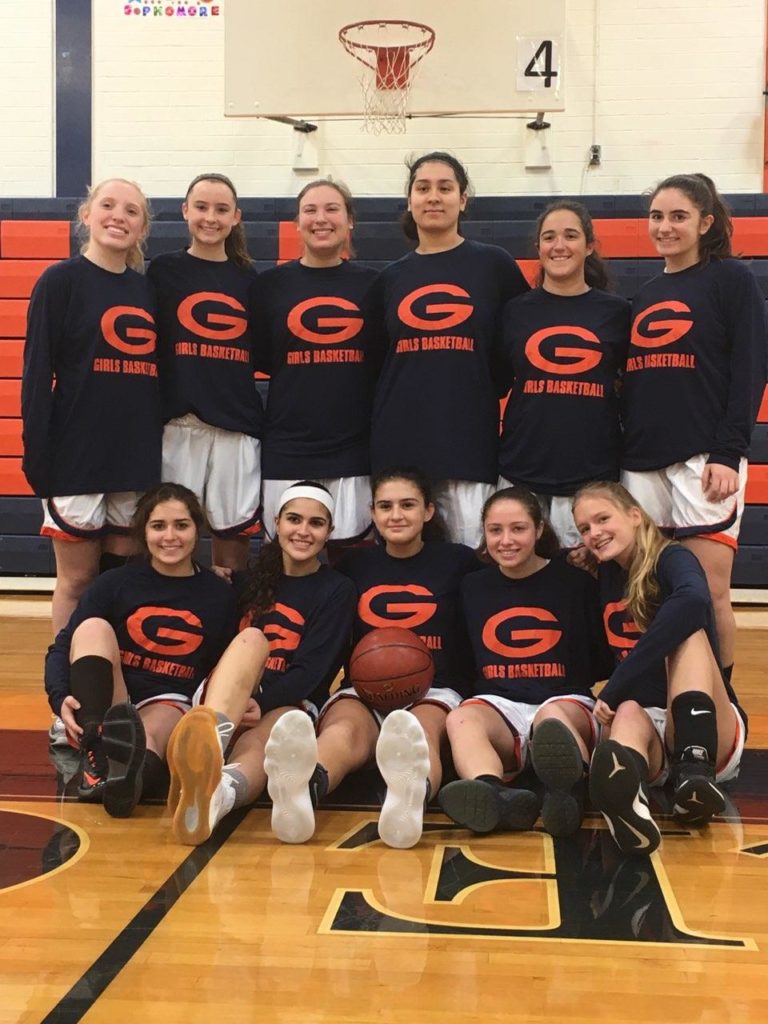 Girls Hoops Win Playoff Game At Yorktown, Face Albertus Magnus Saturday
Febraury 14, 2018
The Greeley Girls Varsity Basketball team overcame early foul trouble, put together a solid second half and defeated host Yorktown last night 44-38.
The game was intense and close throughout with Yorktown taking a 21-19 lead into the half.

The team advances to play at #3 seeded Albertus Magnus, Saturday at 3:00pm. Come out and support the Quakers. Albertus Magnus HS is located at 798 Route 304 in Bardonia, NY (Rockland County) Go Greeley Hoops!

Girls Basketball Comes Up Short Against Fox Lane
by Matty Wasserman ‘21
Tuesday, January 9th- The Greeley Quakers Girls varsity basketball team hosted the Fox Lane Foxes, as the front end of a rivalry-night doubleheader. Fox Lane got off to a hot start from the field, led by the senior six-footer Maria Violante. Two 3-pointers midway through the second quarter from Quakers captain Alexis Klein sparked some energy into the Greeley offense and put them back into the game. Multiple layups by Greeley, coupled with a 3:20 minute scoring drought for the Foxes to end the half resulted in a slim 21-18 Fox Lane lead at halftime.

The Foxes reversed their late-half scoring woes by starting off the second half with two quick baseline jumpers. From there, Fox Lane broke the game open with a 14-2 run that included numerous steals and breakaway finishes at the rim. However, Greeley’s sophomore guard Jesse Harris was able to limit the damage by hitting a pair of shots, and then captain Brianna Gadaleta put the Quakers back in striking distance with a 3-pointer. Unfortunately, Fox Lane fought off Greeley’s comeback, and ultimately took the game in stride by a final score of 47-33. The Quakers will look to bounce back in the second game of a three game homestand vs. Yorktown on Thursday.

Thursday, December 14 - The Greeley Quakers girls’ varsity basketball team played host to the Roy C. Ketcham Indians in the teams’ only meeting of the season. The closely contested first quarter resulted in a 6-5 Greeley deficit, and the second quarter opened with a 5:34 scoring drought by both teams. The first half ended with an 11-10 Greeley lead, despite a buzzer beater off-balance layup from Ketcham.

Greeley got off to a hot start at the opening of the second half, including two 3-pointers from the Quakers’ junior captain Brianna Gadaleta. Greeley appeared to be gaining momentum after taking a 21-17 lead with four minutes to go in the third quarter, but Ketcham promptly responded with a convincing 8-0 run. Early into the fourth quarter, sophomore forward Kat Genda injected some life back into the Quakers with a game-tying 3-pointer. Although a late comeback effort was put together by Greeley, Ketcham’s star guard, Katie Wall, put up 11 points in the fourth quarter to cap off a huge night. It was a tough 41-33 loss for Greeley, who will now look to bounce back Saturday, on the road at North Salem.